Philip Roth’s The Human Stain represents a black racial being named Coleman Silk who attempts to pass for a white in the 1940s and had successfully led his life for 40 years. What is notable for his passing narrative is that he passes not for a WASP but a Jew. This complicates his subject position, which can open a possibility for a new third subject position. But he internalizes the white male patriarchal ideology and firmly believe in American individualism. For racial passing, the dominant whites tend to see it as a deception and a kind of threat to white powers, while African Americans show more complicate and ambiguous response to it. On one hand African Americans regard passing as a betrayal to one’s ethnicity, on the other hand they think it can be a subversive strategy to white powers, questioning the racial category of ‘whiteness’ and ‘blackness.’ In this novel, Coleman’s passing is positively represented by the narrator Nathan Zuckerman, a Jewish writer and Coleman’s sister Ernestine. Ernestine tells Coleman’s passing was meaningful in its own way although Coleman’s other family members criticise it as a betrayal and an egocentric pursuit. Ernestine’s positive perspective to Coleman’s passing is closely related with her point of view which is distanced from the ‘politically correct’ position in the 1990s which focuses on minority subject position. She advocates the Western humanistic tradition like her brother. Zuckerman shares Ernestine’s perspective and he also admires Colemnan’s passing life. Although he mentions Coleman’s passing includes the savage sin to his mother and his ethnic community, he shows more sympathetic view for him as a passer. He is trying to construct Coleman’s story as an American story of self-creation. He even compares Coleman’s passing to an artistic activity to invent oneself. This kind of Zuckerman’s perspective has a danger to weaken the meaning of race in an American society. Considering that a contemporary American society is not fully free from racism, the exploration of the complex meaning of race is still significant. This novel does not fully represent the meaning of race. 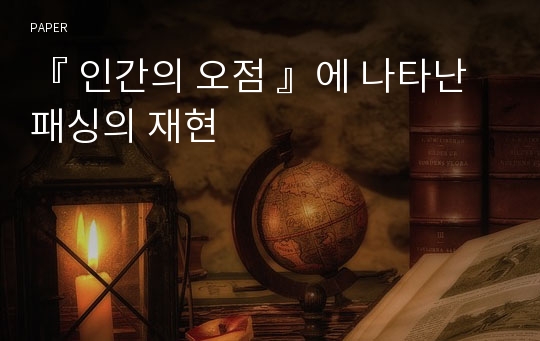