Shin, dongyeob is widely known as a poet who walked along the way of participation poet of 1960s in Korean literary history. That is, he paid considerable attention to reality reformative function as well as artistry of poem. This way, his poetic spirit is interconnected with social confused period of 1960s. He has a belief that social confusion could be purified through poetry. That belief changed the direction to be diffused to the public by widening the position of poetry that had been locked in characters on the papers. The point that he widened activity area to the poetic drama that attempted expansion of poem genre and Operetta without staying at the long poem and epic poetry was originated from his poetic spirit. This research analyzed the characteristic of work targeting Shin, dongyeob’s poetic drama Shade caved in the Lips which was born from the above poetic spirit. This work finished verification by literary members by presenting in Habpyeonghwe( ) of ‘poetic drama club’ and was performed on the stage of the National Theater during two days, February 26-27, 1966, which has a great significance in poetic drama history. Though the performance did not succeed greatly, however it has a significance in regard that it cognized the crisis of poetry and found the route of overcome in the direction of poetic drama that is possible to popularly diffuse. As the research result, the key point of this work can be integrated largely in two ways. Above all, superficial structure shows a pessimistic viewpoint that the tragic history by ideological conflict will never end with the premise of an aspect of war process. Particularly, the writer’s viewpoint is it is eternally impossible to reach reconciliation and freedom, eternal dream of human race, since human history cannot be fundamentally free from ideological conflict and war. However, when expanding this to in-depth meaning, accordingly human race also should more strongly practice efforts to open a path to reconciliation and freedom beyond conflict. The writer implies the realization of the idea is to make(transform) hoes by melting guns. Nevertheless the same iron, if a gun means only ‘the shell’ as the weapon that symbolizes attack, destruction and conflict, hoe means the substance that symbolizes cultivation, creation and reconciliation as an agricultural tool. This work symbolically shows the ideal of the writer as this through the poetic drama that is made in the connecting point of poem and drama - character of synthetic art. For example, it structuralized the future of human race which should go toward the way of reconciliation, unification and freedom by terminating opposition, conflict and war through poetic drama of different kinds convergence. 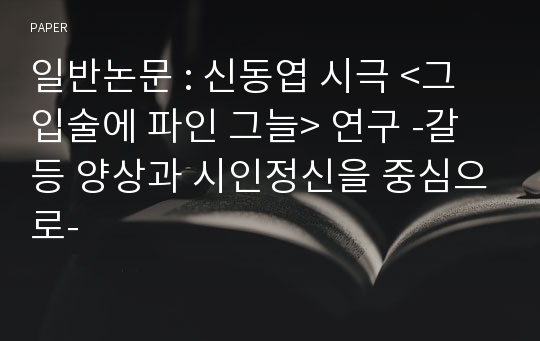