This article explores the syntactic and semantic characteristics of Spanish negation adverb ‘no’. There has been a long discussion about this topic, however the negation itself has a lot of problems. We argue that the negation adverb in Spanish has dual function, the one is to negate something and the other is to disambiguate the meaning of any phrase or sentence. From the syntactic viewpoint, the positon of negation adverb is very strict in many cases, but sometimes happens some shift in its position, the semantic change is going to happen. We try to find the reason why the negation adverb can make clear the meaning of sentence. For example, the modal verb ‘poder’ has three different meanings, but with the negation the meaning is going to be reduced to two. In this paper we are going to explore this aspect and we try to give some generalization on this. For Korean students of Spanish as a second language, the theoretical solution or suggestion is very important so that we are going to take into consideration the characteristics of Korean negation sentece which has two types of structures. We believe that English data and other languages can support our generalization about the negation adverb as far as this kind of typological approach study is concerned. According to our survey of Korean learners of Spanish, the sentence “Puede que no” gives some difficulties to analyze syntactically. The theory of promotion of verb in the sentence cannot apply to this case. Through this paper, we find that the flexibility of negation scope can cause a lot of problems in the interpretation of sentences. From semantic point of view, we try to explain the ambiguity of some phrases and modal verb, for instance, ‘poder’ and its relation to negation. The negative prefix also presents this kind of ambiguity as well as bracketing paradox which can be another morphological issue. The traditional grammar considered the negation adverb as some modifier of semantic feature, however recent research on this topis has shown a lot of dilemas in the intrepretation of ambiguous senteces. The perfective or durative features of any kind of predicates must be good example of interface between syntax and semantics with regard to the negation adverb. 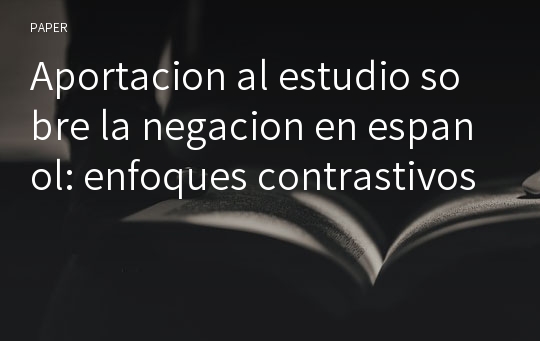