P597 : Hypopigmented patch within acanthosis nigricans without significant loss of melanocyte or melanin

Acanthosis nigricans(AN) is characterized by velvety hyperpigmented plaques distributed on axilla, neck, and submammary area. Close relationship with obesity and insulin resistance is often observed. Vitiligo is an autoimmune disorder affecting melanocyte survival and eventually leading to destruction. Histopathologic examination reveals decreased or absent melanin or melanocytes. A 16-year-old male presented with hypopigmented mildly erythematous patch with surrounding hyperpigmentation on neck and shoulder. The latter appeared approximately 6 years ago, when the patient was receiving treatment for his obesity and fatty liver change. The former appeared 6 months prior to the visit and grew in size since then. Under the impression of AN with vitiligo, biopsy was performed on both lesions. Though pathology report with H&E staining was consistent with AN, no significant decrease of melanin or melanocyte could be found in S-100 and Fontana-Masson stain. Topical steroid and tretinoin was applied to the hypopigmented patch, followed by erythematous reaction but no pain or itching sensation. Up to now a number of case reports with similar skin lesions could be found. However, biopsy of all of these cases revealed loss of melanin or melanocytes. Herein we report a rare case of AN with hypopigmentation but no significant loss of melanocyte or melanin, with the possibility of AN with partially sparing area recognized as hypopigmentation. 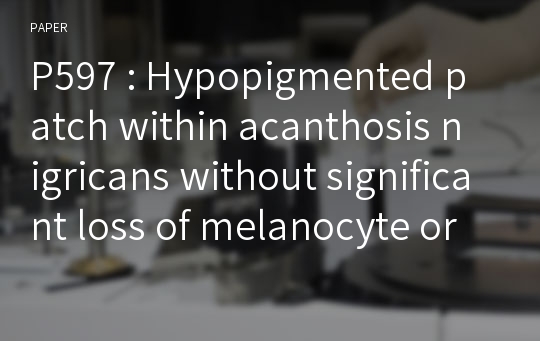