P594 : A case of pentachrome vitiligo

Vitiligo is characterized by the appearance of a patchy discoloration of the skin evident in the form of chalky-white or milky macules. Infrequently, it may show other morphological variations. Pentachrome vitiligo is a rare variant of vitiligo that reflect the presence of five shades of color: white, tan, medium brown, dark brown, and black. The significance of pentachrome vitiligo is unknown; it may represent a metastable or transitional pigmentary state in the slow repigmenting process. A 35-year-old woman presented with multiple depigmented and hyperpigmented macules of 5-year duration on left hand and both extrimities. The lesions started as the depigmented patch, but new hypopigmented and hyperpigmented lesions around the original depigmented patch developed. Skin examination revealed the presence of five colors of skin: white, tan, medium brown, dark brown, and black. The hypopigmented spots were well-demarcated macules, which were accentuated by examination under a Wood’s light examination. She had no concomitant dermatological diseases and autoimmune diseases. The number of melanocytes in biopsy specimens of depigmented and hyperpigmented macule were normal. However, depigmented and hyperpigmented macule were decreased basal pigmentation and increased basal pigmentation, respectively. We report a rare case of pentachrome vitiligo, in which five shades of color were observed in a 35-year-old woman. 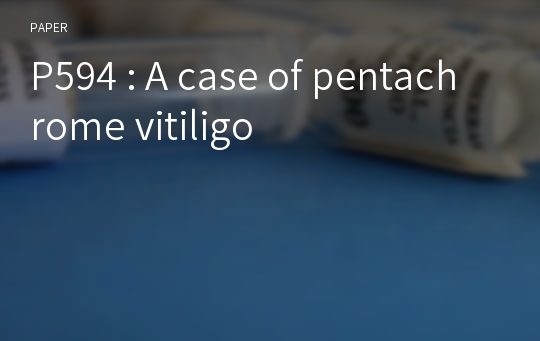