Korean traditional norms are Confucian Ye (禮- decorum), which is a value system working prior to the order of positive laws. In Korean traditional society, the purpose of laws is observing Ye as well as behavioral norms derived from Ye, and accordingly the laws were established in order to enforce Ye and to punish any behavior violating Ye. According to Ye thought, in a human community behavior complying to Ye is an area of freedom and behavior deviated from Ye invites regulation from outside or becomes subject to criminal punishment. Ye thought has been discussed as an ancient Chinese thought since thousands of years ago, and it is an undeniable fact that the thought was transmitted to Korea and has been settled as legal culture for Korean people to the present. That is, behavioral norms, social norms, and legal systems based on Ye thought have been continued until now throughout Korean history, and a large part of Korean people``s legal culture and legal values is also based on Ye thought. With regard to the relationship between Ye and laws, first, Ye is a thought complying to the order of nature and is a human reason following the way of heaven. Second, Ye is a thought of life respect. Third, Ye is a human behavioral norm. That is, it is a personal norm for the discipline of individuals and, at the same time, a social norm to be observed by society members. Fourth, Ye is a rule followed by coercive power. Ye has comprehensiveness as a law in that any norm established by society members`` agreement can be called a law. Fifth, the essence of Ye does not change through times and countries, but its interpretation and operation may be different, Sixth, Ye is a comprehensive norm embracing all lawabiding areas to which laws are not applicable. Seventh, Ye also playa role as a natural law. That is, Ye is the foundation of positive laws and, at the same time. it plays the role of a natural law that is superior to positive laws. Recently with the emergence of the theory of national restructuring in Korea, discussions are continued on the amendment of the Constitution, and attempts and efforts are being made to solve social problems by changing laws and systems such as governmental structures, power structures, the Government Organization Act, and related institutions, but from the viewpoint of Ye thought and laws, the theory of national restructuring, which is limited to the restructuring and partial reshuffle of the central government, division or merge of jobs among departments, is somewhat inadequate as an approach to solve current problems in Korea. With regard to the objects and methods of national restructuring, the key is not the reform of hardware, but the reform of software should come first or the two should take place simultaneously. Through in depth discussion on Confucian democracy. moreover, the relationship between Ye thought and laws should be restructured fittingly to the current situation of Korea. That is. all laws and regulations should be reviewed based on Y thought so that they match the etiquettes and proprieties of democracy and human love. In particular, Korean laws that are contradictory to Ye or that fail to reach the level demanded by contemporary Ye thought should be studied more intensively and renewed into behavioral norms in harmony with Ye thought. 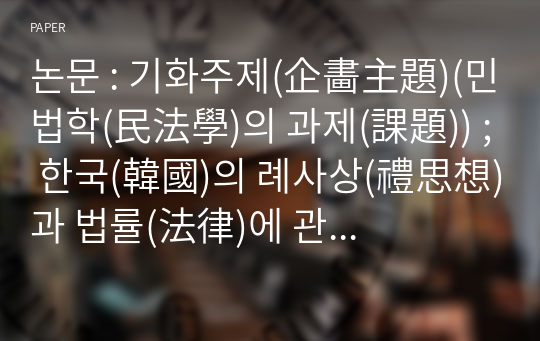