Frederic Rzewski, an American avant-garde musician, has made a significant contribution to the contemporary musical scene as both a pianist and a composer. As a composer, his compositional spectrum encompasses the full range of musical traditions, including serialism, minimalism, medieval music, impressionism, indeterminacy, jazz, pop, and American folk music. As a proclaimed Marxist, he often combines his music with his outspoken political convictions. Fusing elements from various compositional traditions with extra-musical associations, he has accomplished his own unique and individualistic musical style. This dissertation provides an in-depth account of Rzewski’s <Down by the Riverside>, which was written in 1979 as No. 3 in the set constituting his large- scale piano piece, ≪North American Ballads≫. Based on the quoted tune “Ain’t Gonna Study War No More”, this piece employs various musical styles. Here, the quoted tune and its social/historical context will be provided as a framework for achieving a better understanding of the piece. In addition, a detailed motivic analysis with an annotated score will illuminate how these motives are disguised in a palette of different compositional styles, which acts as an organizing unit. 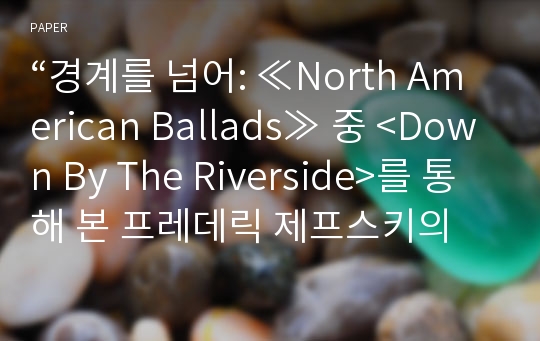