Musical is the crown jewel of all performing arts with its ever increasing popularity. From plot, music, fancy stage setting to make-up, musical encompasses various artistic genres. Among them, music and plot are crucial in increasing its quality as an artistic genre. Commemorating the 100th year of the assassination of the Empress Myeongseong, the musical was produced based on the novel, ‘Fox Hunting’ by Mun-Yol Lee. It debuted in 1995 at the Seoul Arts Center in Korea and continued its run outside of Korea first in New York Broadway in 1997, L.A., London and Toronto after that, establishing its foothold as a Korea’s representative original musical. Thanks to such fame, many studies have been conducted on it in various areas. However, more researches are required regarding its music. In the study, it is to analyze how much the musical is related with the historical event and to analyze its main songs related with the event to know how well it describes the event in the musical and musically. In the study, total of four songs were selected and their music, lyrics and scenes were analyzed to know their relations and in order to find out how the historically important event was reviewed. The first song is ‘Meeting on Japan's chosun policy’ from the last scene of the act 1 in which Ito introduces Miura to assassinate the Empress Myeongsong and they swear loyalty to the Japanese Emperor. The second and the third songs are ‘By the Time This Drink Gets Cold’. This song is from the act 2 in which Miura and killers conspire the assassination under the name of “Fox Hunting” and swear loyalty to the Japanese Emperor and conducted the ceremony. The last song is ‘Last of General Hong / The Queen is Hunted Dow / Find the Queen, kill the Fox’ from the scene in which the Empress is killed by Miura and killers. It was most regrettable that the worldly-renowned and mega-sized Korean original musical lacks Korean traditional color, musically. There was almost no Korean traditional musical effect. There are few parts which show Korean traditional color well by using Korean traditional musical instruments, rhythms and pentatonic scale. They include the scenes of military service examination, exorcism for child-bearing, battles with westerners and the conference before the King Kojong. And such scenes use Korean traditional music to instill nationalism. Then, it should be considered that rather than using western style orchestra, music with thicker Japanese colors are used for the scenes in which Ito, Miura and killers appear. In addition, using Korean and Japanese musical instruments should be considered to show more dramatic effects for the scene of the assassination of the Empress Myeongsong. The musical will be performed worldwide and therefore, will promote Korea’s international status. Therefore, it could be recommended to contrast Korean color and Japanese one more dramatically in music to highlight the historical fact and to use revolving stage to give more dramatic effects. Moreover, more thorough historical investigation is required. In addition, it was not easy to collect data in writing the thesis regarding the musical. Music is very important along with other elements in musical. Songs are generally revised after its debut for better performance. However, for more thorough music analysis and improvement of the production; it should become easier to collect data. The musical the Last Empress is a frontiersman of the Korean original musical and is significant that it opened the way to the world stage for Korean original musical. 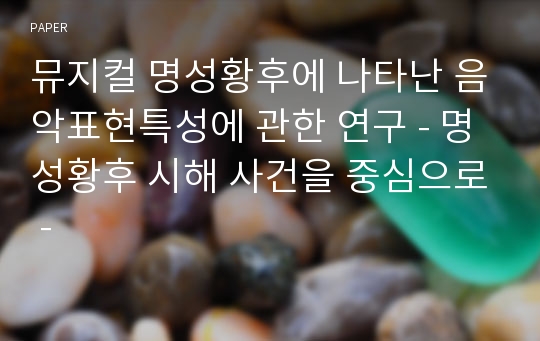