China’s banking system has shown a quantitative development since the its reform and opening up, but there still exist a double imbalance for its quality falls behind. However, China’s direction of economic development has been switching over from exportation industries to domestics and Chinese government is expected to strengthen the banking system centralizing on banks, and also distribute and mobilize the financial recourses for advanced banking business. China joined WTO in 2001, and it proposed its opened schedule for China’s henceforward financial market for 5 years. In case of China’s foreign-capital bank, ① China expanded its range of foreign capital related business and the branches of the official, ② revocation the regional restriction of handing Yuan and other regions,③ gradual revocation of customer restriction so that all chinese customers at China’s foreign-capital banks can access all the services they provide and enforced national treatment. Also, china permitted hard money, call money markets, issuing foreign credit cards, substitutional issuing foreign credit cards, the abolition of restrictions about Foreign-capital banks’ ownership, management and legal form by January 2005, permitted financial lease of foreign-capital banks and non-bank financial institution’s monthly installment plan for vehicles. China classifies its banks into four types of People’s bank of China as a central bank, Political bank, Commercial bank, and non-bank financial institutions. And the Foreign-capital banks are financial banking institution within China that is approved the establishment by China’s associating laws and regulations. Independent Foreign capital banks, branches and offices of foreign banks’ capitals are obtained from overseas, but in the case of China-Foreign partnership banks it should fulfill all the conditions that its foreign financial institutions’ investment proportions should not exceed 20 percent of total registrated capital, and in case of many out-of-area financial institutions, its total ownership ratio shouldn’t exceed 25 percent. For liaison factors of Foreign-fund banks’ capital, Chinese government established and enforcing the laws and regulations to manage the Foreign-capital banks, which represented as administration ordinance of foreign-capital banks, and minor regulations of it in 2006. In this paper, throughout the legislation of foreign-capital banks, we will examine present condition of WTO agreement and Chinese foreign-capital banks opening, the concept and features of the foreign-capital bank and its market entry, The foreign-capital banks’ foundation, alteration, closure, settlement, and legal responsibilities and review the problems of Korean banks’ entering chinese market and their remedies. 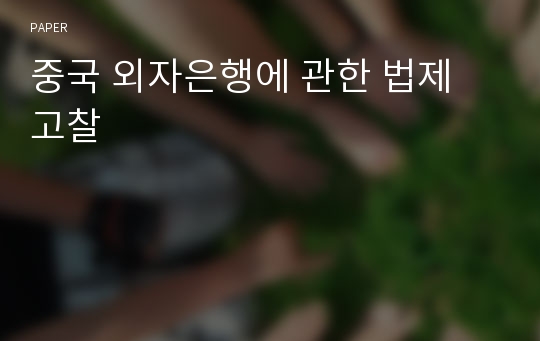