In this article, the numerus clausus principle and its application in the Property Act of the People"fs Republic of China(2007), are discussed. To begin with, we introduce the discussion with a general survey of China Property Act in its making. At some disputes and after the outcome of six drafts of property law, the article 5 of China Property Act prescribes expressly the principle, which says, the types and content of property rights(so-called Typenzwang and Typenfixierung) shall be stipulated by laws. In the article, the focus is on the numerus clausus principle of this act. The numerus clausus principle has been recognized as one of the basic principles of the civil law of property and has its roots in roman law, some states in the civil law system have express rules, in there civil Code or show equal doctrines and judicial practices. China has the same position as the former, so has a express recognition, and limits property rights in their number and content. In this meaning, it limits the principle of private autonomy in the field of property law.
An obvious problem of the issue is, that, we think, the numerus clausus principle results in a closed property rights system and cannot get promptly new types of property rights arising from the need of society and economic dealings. In this view, it needs the flexibility. For it, there are some suggestions. Guided only by the customary law, which is expounded by many scholars, the courts may create new real rights as they see fit. This issue is beside the question in Korean civil Code(art. 185), because it says, no real rights can be created at will, other than what is provided by act or customary law.
This study offers us some useful suggestions, as one of the recent and comparative legislation, for the amendment of Korean civil Code, which has been newly begun since 2009. 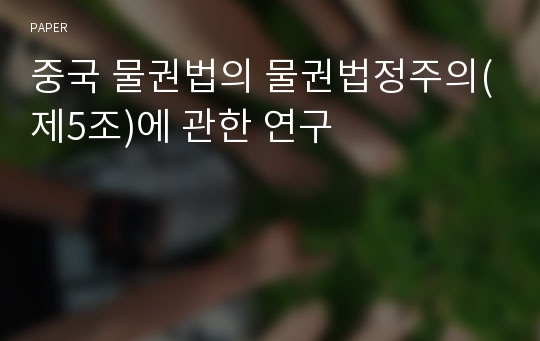