The theory of Universal Grammar (UG) has been recognized as a well- developed framework to account for the human``s language acquisition and the common properties of all natural languages. However, this paper attempts to instantiate a ``relative`` universal of structure-dependency principle that has been conceived by the UG proponents as an ``absolute`` universal and the most powerful component of hard-wired UG-inspired argumentations. So the inadequacy of structure-dependency principle is found to impair the forceful advocacy of UG hypothesis, leading to deconstruct its dominant ``principles and parameters`` approach to the long-standing research on human languages. From this point of view it is proposed that a new hypothesis entitled the ``Paradigm of Methodological Options`` should renovate the essence of UG-based model for the cogent explication of variant syntactic configurations, which raises a logical and substantive question of the alleged ``innateness`` of abstract UG principles. Consequently this paper provides us with some insightful implications on native Korean speakers`` initial brain states in terms of English syntax and language pedagogy. 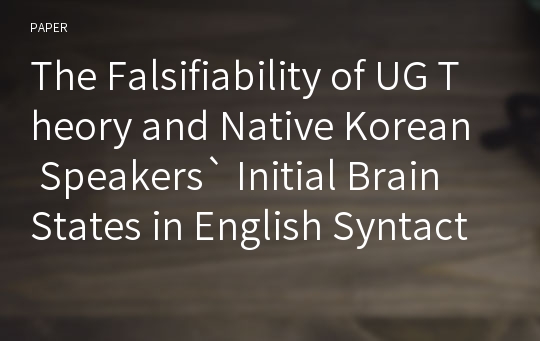