Flannery O’Connor’s stories have garnered critical attention for her religious views. Thus, the interpretation of violence in her fiction has been mainly associated with salvation in her characters. Nonetheless, O’Connor was aware of the historical facts surrounding white supremacist activities in the American South. In its revenge narrative, O’Connor’s story “The Displaced Person” (1955) unveils subtle layers of politics from the Ku Klux Klan as well as her white characters’ views of race and immigrants. O’Connor used a voice of reserve due to her minority position as woman and Catholic. Although she was a white female, she lived within repressive Southern religiosity. Racism prevailed beneath Southern chauvinism and patriotism. The conflicts in the South display the violent aspects of the “Invisible White Supreme Empire.” After the World Wars, devalued whiteness elicited atrocities against socially upward mobile African Americans, foreigners and Catholics. This article explores the convoluted issues of racial hierarchy, miscegenation, and xenophobic reactions in the South. 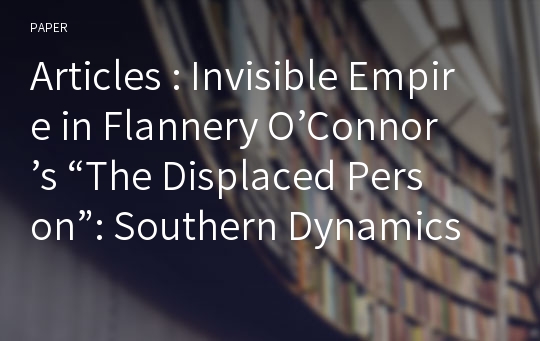