This essay examines the ongoing unfinished racial revolution in America. Despite the fact that Flannery O`Connor lived in the American South, many critics have overlooked her view of racial integration. Regardless of social context, regional struggles due to racism seem to be irrelevant to O`Connor`s works since she mainly deals with her characters` religious realization at the stories` ends. Nonetheless, beneath the narrative surface, O`Connor`s grotesque depictions revolve around the historical crisis regarding racial conflicts in the South immediately before the Civil Rights movement. O`Connor`s white characters` attitudes toward their surroundings reveal the collective level of white Southerners` responses to the racial upheavals in the mid-twentieth century. In this paper, I explore the historicity of heightened tension between whites and African Americans in O`Connor`s “Revelation” (1965) and “Everything That Rises Must Converge” (1965). This article analyzes how the Jim Crow South influences O`Connor`s writings and reversely shows how she responded to racial issues. 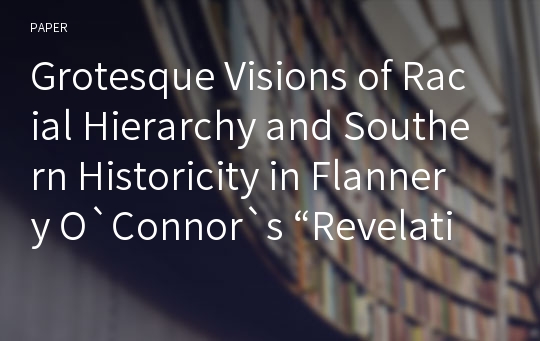