Swift, Wood, and Newton: A Mock Heroic in the History of the New Science

Given the prominence of Jonathan Swift`s satire on the ‘new science` or contemporary ‘natural philosophy,` his satiric engagements with Isaac Newton, the iconic man of the new science, have been surprisingly understudied, even in spite of the two men`s public encounter during the Drapier years. This paper offers to investigate how the Drapier-Newton clash confirmed Swift`s suspicions about contemporary science and provided momentum to his mock-heroic foresight into the yet unwritten history of modern science. Newton`s presence is strong and much more personal than has been generally thought, from A Tale of a Tub and The Battle of the Books through the Voyage to Laputa in Gulliver`s Travels and Polite Conversation. Contribution to the “glory of the great Author of Nature, and to the comfort of mankind” was an ideal/apologia Newton embraced commonly with other members of the Royal Society, but for Swift he failed in both. Not only did Newtonian cosmology in Principia inform the physico-theological apologia for the “usefulness” of the new science to prove divine order, but Newton himself helped propagate such apologia by directly supporting the Low Church divine Richard Bentley as the first Boyle lecturer in 1692. This development, Swift apprehended correctly, was bound to usher in erosion of Christian faith by natural philosophy. His disillusion was sealed when Newton as Master of the Royal Mint endorsed Wood`s halfpence with a faulty assay test due to gross oversights. This head-on clash with the blunder of the greatest philosopher of the time, revered to deification, led Swift to a mocking identification of Newton and Wood the “obscure Mechanick.” Seen against the backdrop of what would become the origins myth of modern science, Swift`s view of Newton was a mock-heroic foresight into its heroic birth. 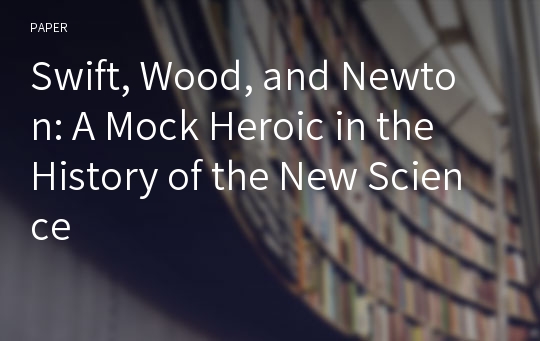