Optimal Forms of Generics in Korean

The Linguistic Association of Korea Journal, 21(1), 69-94. In delivering intended meanings, languages may put more weight on linguistics economy and minimize the specification of functional meanings such as definiteness and plurality, or langyages may prefer distinct forms to express different meanings. This difference is encoded by a set of constraints and different ordering of their optimality in the OT analysis. In this framework, I have considered different forms of generics in accord with their genericity categories. I have argued that the morphological forms of generics are consistent with their semantic number and proposed a more subcategorized faithfulness constraint for plurality FPLGEN, which should be ranked over the markedness constraint FunctN. An apparent counterexample of a non-human characterizing generic does not pose a problem to the current analysis when the mass properties of non-human nouns are postulated as Kwak (2009b) discusses. 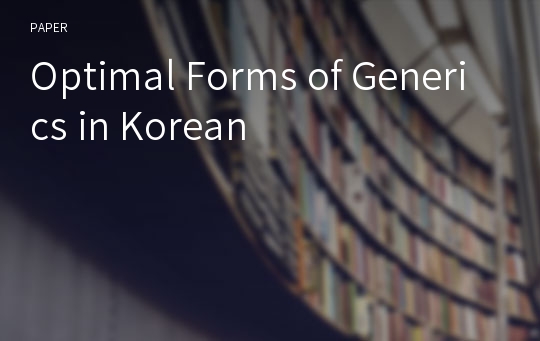