It has been popularly accepted that there were significant changes between the early Wordsworth and the later Wordsworth from the perspective of his political stance. However, this idea of “two Wordsworths,” the one of young radical supporter of French Revolution and the other of old Tory conservative expressing strong oppositions to the several democratic movements and social reformation on suffrage and poverty, should be reexamined along with the new advent of political economy and its consequent reformations on rural England. Wordsworth`s two letters to the Bishop of Llandaff and Charles James Fox respectively show that his early radical republicanism is the result of his concerns about the treatment of the rural poor and their economic predicament, which according to him, were mostly caused by the increasing disproportion between the price of labour and that of the necessities of life. Also his famous anti-workhouse poem, “The Old Cumberland Beggar,” shows his disapproving thoughts on the grim reformation of the Malthusian direction, especially on the treatment of rural vagrants and beggars. By inserting a note on this poem in The Fenwick Notes around 40 years later, Wordsworth reclaimed his consistent sympathies toward the degeneration of those rural poor and their decay of domestic affection which he regards as the most calamitous effect on the commonwealth of rural Britain. It is this paper`s idea that there lies his antipathy toward the reformative measures of political economy under his political changes and that consequently his later conservatism should be reconsidered as a congruent equation of his concerns on rural Britain. 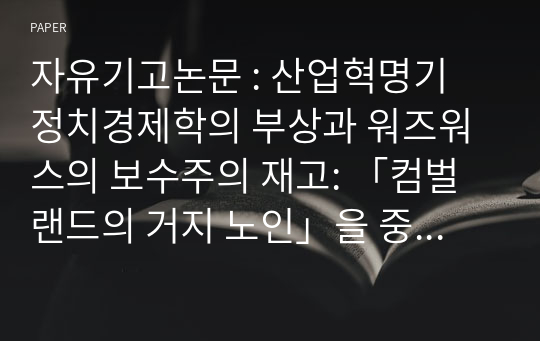